All five books in the blockbuster Percy Jackson and the Olympians series, in paperback, have been collected in a boxed set fit for demigods. Now with glorious new cover art and packaged with a special poster, this value-priced set includes the best-selling The Lightning Thief, The Sea of Monsters, The Titan’s Curse, The Battle of

Amazon Interview: Rick Riordan on Percy Jackson and the Olympians 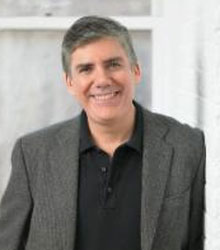 In our exclusive Q&A with Rick Riordan, bestselling author of the Percy Jackson and the Olympians series, learn about his inspiration for the character Percy Jackson, his long-time interest in Greek mythology, and more.

Amazon.com: Since The Lightning Thief was published in 2005 it’s sold more than a million copies, and the four subsequent books in the Percy Jackson and the Olympians series have been blockbuster bestsellers among kids and adult readers alike. When you were writing the first story starring Percy Jackson, did you ever imagine it would become such a phenomenon? How has the success of the series affected your life?

Rick Riordan: I had no expectations other than to make a good story for my older son, Haley. I had no idea it would become a book, much less a series, until he encouraged me to write down the story.

I hoped the stories would get kids reading, but I never anticipated such exponential growth. It was not an overnight success, nor was it heavily marketed at the beginning. The Lightning Thief was passed around from kid to kid, teacher to teacher, parent to parent, and the series got bigger with each book. It really was a grassroots phenomenon. Still, I have trouble thinking in terms of millions. I measure success by anecdotes–the kid who told me he never liked books until he found The Lightning Thief, the parent who thanked me for turning her daughter into a reader, the teacher who said I turned her class around because they bonded over reading Percy Jackson every day. That’s what it’s all about for me.

It hasn’t changed our life much other than making me busier, but doing something I love! I still drive the same car. My kids go to the same schools. We try our best to keep things simple at home.

Amazon.com: You’ve said that you wrote this series for your son, Haley, who, like the book’s hero Percy, has been diagnosed with ADHD and dyslexia. How does Haley feel about being the inspiration for a bestselling series?

Riordan: Both my sons are always my first audience. I read the manuscripts to them aloud to make sure they work for young readers. Both are proud, though being teenagers they are also embarrassed by the attention they get sometimes. They don’t like it when classmates ask them to get my autograph. Haley likes to play down his importance in the genesis of the series, but I think he’s enjoyed growing up with Percy, and I know it has increased his interest in writing. Recently he came into my office and announced the manuscript he is working on now has a bigger word count than mine!

Amazon.com: Percy’s stories are based on Greek mythology–classic tales that have been passed down for thousands of years. What lessons can kids today learn from the ancient myths?

Riordan: The stories have everything–romance, magic, mystery, action, and great characters. The Greek gods are our first superheroes. They have amazing powers, but they are also very human and subject to jealousy, envy, anger, etc. Kids especially respond to them because they are both powerful and accessible. Who wouldn’t want to be the son or daughter of a Greek god? By reading about the struggles of gods and heroes, we learn a lot about being human, and that’s something that hasn’t changed over the millennia.

Amazon.com: Have you ever visited Greece? What was it like?

Riordan: I’ve been to both Italy and Greece, but only after I finished the Percy Jackson series, which is ironic. One doesn’t need to travel there, however, to appreciate the stories from mythology. Those are quite universal. Greece actually reminded me quite a bit of my home in Texas–hot, green, hilly, somewhat arid, except the ocean is much better in Greece.

Amazon.com: Percy’s guardian satyr, Grover, is strongly connected to the Earth, the well-being of animals, and humans’ emotions. Moreover, Percy’s life is relatively free of technology, in contrast to many people today. Is there a message about the natural world that you’re hoping to convey through Percy and Grover?

Riordan: I don’t consciously put messages in the books, because my job is telling a good story, not preaching. However, I do pick up on themes from Greek mythology that still resonate in the modern world, and certainly man’s relationship to nature is one of those. I’ve always been fascinated by the god Pan, and his reported death in ancient times. It seemed a very relevant theme for modern readers.

Amazon.com: Percy encounters many dangers throughout his adventures–some that could be considered beyond the abilities of a normal 12-year-old. Though we know Percy is no normal kid, where does he find the find the strength to overcome all the challenges that he encounters?

Riordan: None of us knows what we’re capable of until we are called to action. Percy may have demigod abilities, but he’s a very normal kid in a lot of ways. He goes from a 12-year-old who is unsure of himself and his relationship with his friends and family, to a 16-year-old young man who steps up and leads a war to save Olympus. Most heroes are born out of dire circumstances, and Percy is no exception. He’s afraid, unsure, doubtful, angry–all the things we would be if we were called to deal with a crisis. But he does the job anyway, and that is the definition of courage.

Amazon.com: It’s often said that writers write about what they know. Were you interested in the ancient world when you were Percy’s age? What kinds of books were your favorites when you were a kid?

Riordan: I’ve always loved mythology. I had a great English teacher who showed me that The Lord of the Rings (the only series I would read at age thirteen) was based on Norse myths, and from then on, I was a mythology buff. I taught mythology in my own classroom when I became a teacher, and it was consistently my students’ favorite unit.

Amazon.com: If you discovered, like Percy, that you were the son of a Greek god, who would you want your immortal parent to be?

Riordan: I’d like Poseidon or Athena, but with my luck, I’d end up with Dionysus.